They're Tearing Down My Coney Island 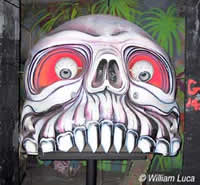 I don't know why I'm crying, but I am. I don't know why there's a lump in my throat, but there is. Astroland is closing. They're shutting down Deno's Wonder Wheel Park. They're tearing down my Coney Island, the one seen in fading Polaroid and Kodachrome snapshots blurring into history, and watched on YouTube snapcasts pidgeonholed into two-minute slices for quick viewing. My tawdry, unattractive Coney Island will be replaced by the upscale, condo-dwelling, MP3-swilling crowd, which quantifies, properly socializes, and neatly categorizes everything into discrete gigabytes of wholesome 0s and 1s on their thumbdrives.

In our digitized and homogenized world is analog entertainment inconvenient? Entertainment which hasn't been iPodded, or frontal corporatomized, or discretely measured into binary drips repeatedly delivered through popular media and fat business: who still wants it? Entertainment with tattoos flaring, piercings gleaming, and inner voices speaking first, inner ears listening last: why not open a mall instead? The not so pretty entertainment best enjoyed in ill-fitting clothes and loose bodies summed into fractions instead of rounded numbers: what, no Starbucks? Coney Island's skewed amusements have sidestepped the ubiquitous, commercialized, lockstep entertainment formulas medicating us through every day until now. But its time has run out.

Maybe I'm overreacting. Maybe I'm out of touch and all's right with the world. Or maybe, just maybe, the closing of this historic amusement park, this last bastion of hucksterism and questionable rides, of piss-smelling walkways, seedy denizens, and plastic trinkets--maybe this is the death knell for the gritty, indiscreet, and impertinent analog amusements unfit for our digital consumption. You know, the fun stuff not approved, not sanitized, not reamed out to hell by our wannabe clean-cut, moral-spewing but not doing culture? 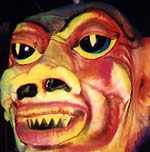 When the real Coney Island closes forever, where will Deno's Wonder Wheel Park and it's over fifty Spook-A-Rama, "the world's longest spook ride" go? Okay, well, sort of; it was the longest ride if you counted in the interminable twisting and turning of the Pretzel rotating car as you traversed a narrow outside courtyard, between the darkness of the two buildings once used to contain the myriad terrors popping up at you.

In an almost forgotten summer, in a long ago year, the kid I was got the joke. Before I could inhale my first gasp of disgust at the yucky "spiderwebs" touching my head in the brief, utter blackness of building one (how long had those strings hung in the dank, musty air?), I was flung into the bright sunlit courtyard to make my lengthy--and very uneventful--journey toward building two where the real horrors waited. Most of the ten-minute ride was spent in that courtyard, whirring around the track, looking at fake plants with signs that read "poisonous." In-between the hissing sounds of compressed air escaping, unoiled machinery screeching, and quivering soundtracks, I swear I could hear William Castle chuckling in the dark of the second building when I finally got to it.

But I took this mindshot long ago, well before building one was torn down and the courtyard track dug up, replaced by more--better--money-making concessions; well before the lurid outside facade of fading, peeling-paint monstrosities was replaced with more innocuous figures of Laurel and Hardy, and Disneyized pirates, banishing the leering, bug-eyed gargoyles, spookshow skulls, and pitchfork-wielding devils to limbo. The salty air hastened decay and ever-increasing safety codes did the rest; little remains of the original grotesqueries quickly flashing by in the darkness; but still they scream for life beyond YouTube and Twitter.

Although many of the original displays have been replaced, either through deterioration or the need to upgrade to current safety codes, Spook-A-Rama has accumulated one of the most eclectic collections of stunts to be found in any dark ride. Some were built on the premises when the ride was new; some are from long-gone manufacturers such as Bill Tracy and Animated Display Creators; others are from newer current studios like Distortions Unlimited, Halloween Productions and Screamers; and many are of unknown origin. Still others were acquired from neighboring Coney Island rides that had closed, such as Tunnel Of Laffs and Dragon's Cave, as well as the aforementioned 'Hell 'N Back' Tracy-furnished ride at Rockaway.--Bill Luca, www.laffinthedark.com 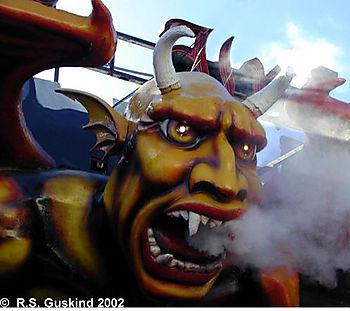 Astroland, the "space-age" theme park's lease on life has expired, too. I was there in 1962 when it opened. I won't be there when it closes after this one last season. Many dark rides have come and gone, but Dante's Inferno is still there. Sure, it's changed, but haven't we all? Its original theme, Dante's Divine Comedy, no longer applies, instead replaced by a hodgepodge of stunts (lingo for the creepy, often cheesy, tableaus) walled behind glass, safely distancing you from the scares, keeping the improper terrors properly out of reach. Nothing here lunges at you or threatens you. Like most digital entertainment: you just watch. Aside from a circular saw dismemberment, most of the terror comes from twirling around in the dark, strobe lights, and waiting for the next stunt. Unlike the denatured facade of Spook-A-Rama, Dante's Inferno still has skeletons and a pitchfork-wielding devil clutching a victim. Being portable, maybe the ride will find a new home elsewhere.

Take a deep breadth of air from the Coney Island boardwalk. Do you smell it? Deep-fried and crispy-brown it comes, heavy with salty, peppery heat, topped with sugary-sweet dripping ice cream cones, mingling with the odors of sun-bleached wood dried out by wind-blown sand and etched by the thousands of footsteps mashing thousands of potato knishes, squishing millions of hot dogs, kindling endless romantic dreams and littering Coney Island whitefish across many long-gone summers stretched end-to-end. 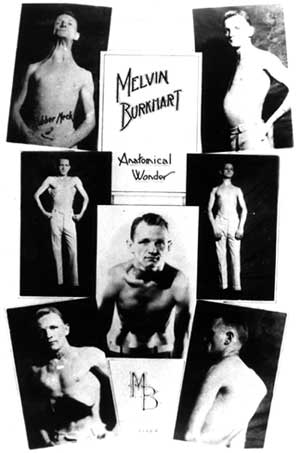 What will happen to the boardwalk when the condos come, and the shopping malls, and the theaters? Where will Sideshows by the Seashore be, the last place where you can experience unusual, analog performers with their imperfect bodies, undulating Ray Bradbury tattoo illustrations, gasoline-thirsty throats, bizarre feats no one else dares to do, and physical triumphs no one else has been cursed and gifted with, showing all off in a genuine, traditional ten-in-one circus sideshow? Where will Satina the snake charmer slither to, or Otis Jordan, the frog boy, roll and light a cigarette with his lips, or Zenobia, the bearded lady, give it a good tug, or Helen Melon, who is "so big and so fat that it takes four men to hug her and a boxcar to lug her!" be hugged? What place for them in our digital age of bodily perfection and propriety? YouTube? No. You can't take the hammer to pound that way-too-long nail into the Human Blockhead like I did on a stifling summer day. You can't touch Satina's way-too-big snake, either, or smell the alcohol swabs as the Human Pincushion sticks needles into his bare flesh.

One last breadth, one last ride. Coney Island's ghosts, Astroland, and Deno's Wonder Wheel Park will depart at the end of the 2008 season. Dreams, imagined futures, and forgotten pasts to follow. But, hey, just catch them all on YouTube.

Posted at 10:23 AM in Reflections | Permalink

Frank-
Thank you. And super! on that wonderful news. But given the drawn out history of the "development" of this area, I'll believe everything's all right after the dust settles. Anything can be overturned by eminent domain or commercial interests.

Nicely written but a bit of an overreaction. Deno's Wonder Wheel Park is NOT closing. Sideshows By The Seashore run by Coney Island USA is not closing either, in fact they bought their building last year.

Jk-
First, you've got a fantastic memoir at Coney Island Memories (http://www.myconeyislandmemories.com/. I love reading it.

Sadly, you're right about the olden venues. Only those who've experienced it can really enjoy and remember it. We're all a product of our times. I'm sorry though this generation coming up may miss out on some very special things that are damn fun.

And girls! Yes, you point out the key benefit of a dark ride: smooching and holding on tight to your babe. It's a natural.

HP-
I cherish Laff in the Dark. The depth and love they show for dark rides is a treasure for those of us who enjoy them and mourn their passing in our "sophisticated" age. I'd be remiss if I didn't mention LITD, especially with my using their photos (of course linked back to the source to give them proper credit). I owe them a lot for keeping the memories alive.

Oddly enough, I was about a paragraph into this post when I said to myself, "I wonder if he knows about Laff in the Dark?" I stopped reading and got all my links together.

I used to feel as you do, but in reality who of this generation would ever appreciate these "olden" venues? That said, we Boomers can go back...everytime we bring it up in a conversation to anyone that will listen. Geez how many girls did I get that first kiss from on Spook-A-Rama? I girl was almost obligated once she agreed to go with a guy into such a dark and scary place!